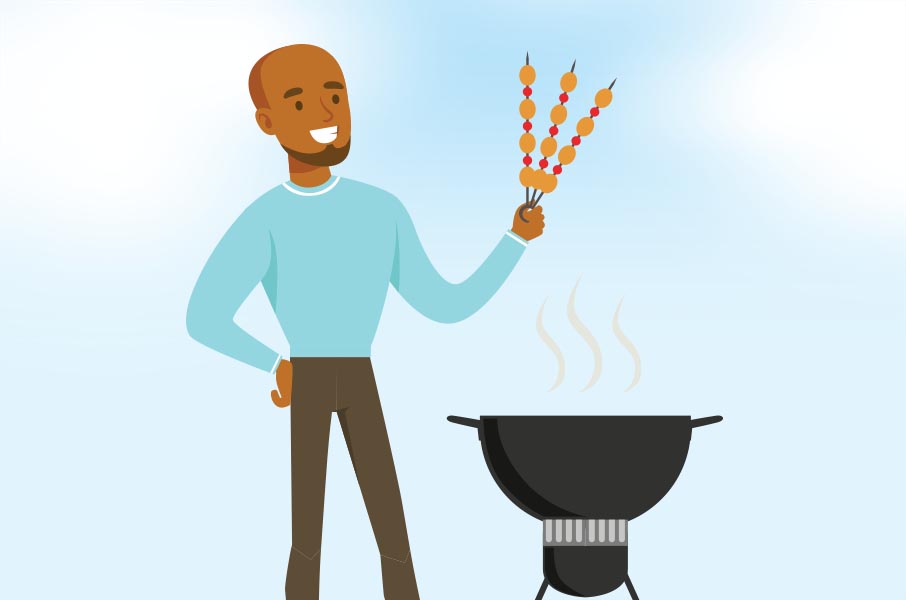 When it comes to grilling, don’t just think summertime…and not just for meat. Here’s how to avoid some common pitfalls and make sure your food is safe, healthy, and grilled to perfection.

■ To prevent food poisoning, thaw and marinate meat in the refrigerator, and don’t brush leftover marinade onto the meat while it’s cooking.

■ Polycyclic aromatic hydrocarbons (PAHs) are carcinogens that form when fat or juices drip onto the fire and create flames and smoke. The PAHs in the smoke can stick to the food.

■ To create fewer PAHs, trim meat of all visible fat and move food away from the heat source (push the coals to the side or turn off the burner that’s directly under the food).

■ To block smoke and flames, try putting foil over the grates. (Don’t wrap the food in foil. That will steam it.)

■ Think outside the onion. If you’ve never grilled pineapple, peaches, edamame, or zucchini, you’re in for a real treat.

■ The more well-done or charred the meat is, the more HCAs it will have.

■ Use an instant-read food thermometer to make sure the thickest parts reach a safe temperature. That means:

■ To prevent chicken and fish from overcooking, start them on the hot side of the grill, then flip them over to a cooler spot to slow down the cooking.

■ Before cooking, heat the grill on high with the lid closed until very hot. Then brush the grates clean and use a folded paper towel held with long tongs to apply a thin layer of a neutral oil that’s good at high temperatures (like peanut or canola).

■ Don’t serve grilled meat, poultry, or fish with the same tray or utensils you used when they were raw.

■ Using a wire brush to clean your grates? Check the grill closely before cooking. Between 2002 and 2014, an estimated 1,700 Americans ended up in the emergency room after swallowing wire bristles that were stuck to grilled food.

■ Keep your cooler in the shade.

■ Refrigerate leftovers promptly. Discard food that has sat out for more than 2 hours (1 hour if the outside temperature is above 90º F).